It’s been over two years since I lost Pie. 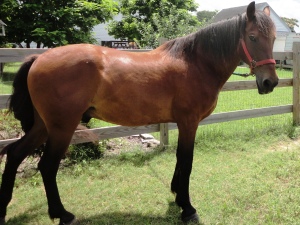 Once in a while, I go to Changing Fates Equine Rescue, where we adopted Dewey, and ride some of the horses there. Most recently I rode an adorable little mustang, and was smitten. All week I thought about him while I was at work, budgeting and planning on adopting him once I had some extra money saved up and set aside. Then Karen mentioned some other people were coming to look at him.

I cleared it with my parents, as he’ll be there with our other two horses, then rode him once more and made sure he passed my “do we trust each other” test. He did, letting me pick up all of his hooves. He gave me a little trouble on the first one, resting his head on my back at one point (not sure what that was about), but then giving me each hoof with ease. (When I mentioned this to Karen, she made a face like he was a troublemaker, and said, “That’s just because he likes you.”) I let her know I wanted him, placing a deposit on him the next day.

Now he’s home and settling in nicely with Dewey and Missy.

The day I had to make the decision, I spoke with Ken, asking if he thought I was doing the right thing. I don’t normally make decisions so quickly; I prefer to plan things, take things slow. So I was second-guessing myself a lot.

“Do what makes you happy,” he said. When I voiced my concern over whether or not I could afford it, be told me, “I heard somewhere once that whatever you have a passion for, you’ll find a way to afford it. People will work jobs they dislike, work extra jobs, even, in order to pursue their passions. It’s part of human nature. Your passion is horses, and I don’t doubt that you’ll find a way to make it work.”

He knew how hard I’d been working all week, gathering up things I didn’t use or want and listing them on eBay and Craigslist to raise extra money. And I realized something: Since I had ridden that horse, since I had found myself and my passion again, I hadn’t touched a video game. Ken and I usually play Guild Wars, and online role-playing game, just about every night together. I’ve known for a while that I’ve simply been playing the game too much, and neglecting other things. My writing, for the most part. But recently I realized that I was using it as a way to hide, too. From what, I’m not sure yet. Life, myself, the pain of losing Pie. Any or all of the above.

And all it took was the right horse for me to realize what I was missing out on and rediscover my passion, and get on with my life.

I used to think a part of me died that night with Pie. Maybe it didn’t. Maybe some part of me just needed to hide for a while. Two years seems like a very long time to hide, but maybe that’s what I needed. Because now I feel ready to form a bond with another horse, and I’m excited at the thought. Whereas I wasn’t before. I rode other horses, but didn’t enjoy it the way I once did, didn’t really want to get too close to them. Because getting close to them meant getting hurt once they were gone.

But Karen says we make a good team, and my mom thinks we look cute together. I think they’re right. And I think Chip and I found each other right when we needed each other. 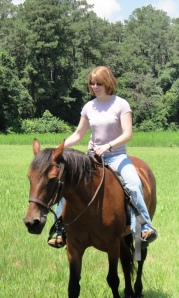 6 responses to “And the Mustang Makes Three”